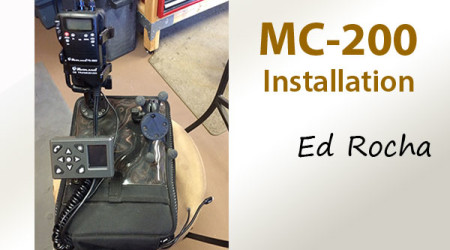 I have been using MotoChello products and currently have a MC-200 system I use with my 2002 R1150GSA. My objective is to move the MC-200 to my new R1200RTW and take advantage of the RTW’s satellite radio, RTW speakers and GPS/Nav interface.

A group I ride with uses CBs (yes, I agree, not my first choice either). I would prefer the CB output not to be directly in my ears through the headset. Based on numerous threads in the BMW Luxury Touring Community, the information on where and how to tap into the RTW’s audio output and GPS/Nav connectors is generally documented. In probing around the RTW it became apparent that it would be easy to tap into the GPS/Nav interface for the transceiver output or use the Aux port through the cable in the right glove box. The transceivers microphone and PTT inputs would come from the MC-200 system.

To avoid ground, polarity and potential warranty issues both the speakers and GPS/Nav are connected through1:1 audio isolation transformers and Posi-Taps. If the Posi-Taps and devices are removed, the RTW will default back to its stock condition with no physically altered wires or connectors.

I have chosen not to use a switch to disable the RTW speakers when the RTW audio source is directed to the MC-200 and the headset for 2 reasons. 1, to not cut any wires and potentially cause warranty related issues and 2, the level to the MC-200 Aux2 port will be low and generally not audible at the RTW speakers under typical riding conditions.

For the MC-200 FM/WB feature I ran a 3’ piece of 3.5mm audio cable for the antenna (one is provided that is small enough to fit inside the antenna connector). I use the MC-200’s internal radio set to the regions weather band.

I had been using the Valentine One audio add-on unit. After a bit of researching on the web, I removed the add-on unit and tapped into the audio on the RJ cable (4-wires). This removed one wire from the MC-200 to the bars/radar and cleaned up a bit of noise from the radar add-on unit. The pin to the outside of the ground pin carries the audio and the pin to the outside of the power pin carries a digital signal. Identify the power and ground using the cigarette adaptor. CAUTION – not all RJ cable are not create equal!

This installation is not final. I plan on refinements that will generally evolve from this base. Following are the details of the current installation;