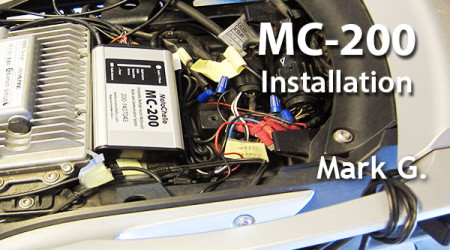 Here’s how I did it. I’m not one of those guys who ends up with everything looking like it came from the factory. This is the most important tool. Every time you screw something up, hit yourself in the head with it. Hit hard. Brain Unit Location. Note I ran the entire wire loom along the right side of the bike. A better solution will be shown further down. Routing of Display Unit cable (note an extension is connected, with heat shrink (provided) to help hold it together. The blue tape is just to highlight the routing. Be sure to go UNDER the air cleaner snorkel. Rest of the Display Unit cable route. Note just a few pieces of plastic had to be removed to accomplish this. After my initial install attempt, I ended up pulling the Alpine unit off, by removing two screws (magenta circle, another on the other side) and stuffing the wire loom under it. Now it’s out of the way, and will hopefully alleviate the need for future Rubber Hammer Procedure events.

The white stuff is called Sugru, available from Amazon, and is a malleable, moldable rubber. I decided to use it on the wires coming out of the brain to keep them from moving around. The stuff is removable. I also zip-tied the entire loom to the frame, as close as possible to the unit, to keep the wires from moving. Probably none of this was necessary, but I had the Sugru and wanted to try it, and have LOTS of zip ties. And here is where I fed the headset cables. This view makes it look as if everything is neat and tidy.

I’ve decided against the RAM system. I’ve ordered this Techmount gizmo instead.