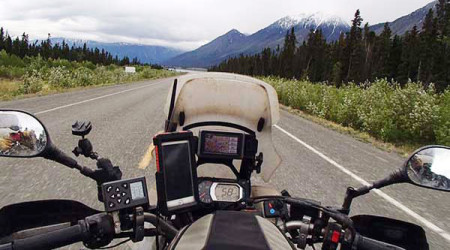 We received this review of the MC-200 from Paul Pellard, also known as Long Haul Paul. He is an amazing man on an incredible journey. We’re proud that he has chosen to take a MotoChello along with him and we are happy to be even a small part of his quest. 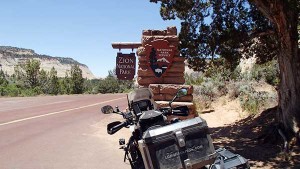 The Motochello MC200 allows mixing sweet sounds with soothing silence. The unit is a fairly newcomer to the motorcycle audio integration market. Through an introduction from Adam of Rocket Moto, John at Motochello sent me out his latest MC-200 system. I’ve never seen a system arrive more complete. Adapters for all types of transceivers, extension cords, and audio patch cords; all labeled in english!  I kept looking in the box for a motorcycle, but sadly, that wasn’t included. The unit consists of two main parts, a thin brain that gets buried somewhere on the bike and a trick waterproof display with illuminated buttons and a color LCD screen that gets mounted in the cockpit. The connecting harness has disconnects on either end, allowing for the unit to be quickly switched to a second bike without fishing out all the wires you buried so nicely behind all the bodywork. Nice feature. 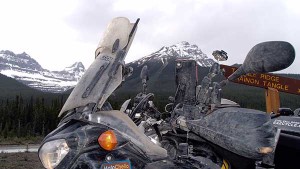 I’m not ready, nor convinced that bluetooth helmet systems available on the market are good enough for the daily use and abuse I would put them through. I need a system to work every minute, in the rain, blazing heat or freezing temperatures and I don’t want to worry about charging batteries. It has to be rugged. I break or wear out my motorcycles and anything attached to them. I need a system that I can depend on. I prefer a wired system, bike powered and permanently mounted.  I want to chat freely with my passenger, hear my GPS prompts, radar detector blips, music, take a call, book a hotel room or ask Siri the meaning of life; all at the same time. Is that too much to ask?

John from Motochello was quick to send me out a system, and answered the phone every time I called. He recommends watching the YouTube videos to learn all about setting the system up. I will admit, I did not, and ended up needing a little help configuring my system. There are lots of adjustments to this highly thought out gizmo, and it sets up a bit different then the systems I have used from across the pond. Once John set me straight and I realized when using the phone as a 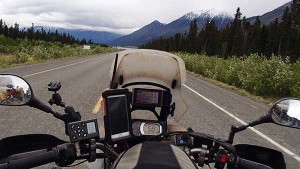 phone requires putting the Motochello into a phone call only mode, it worked as it should.  This mode, allows the microphone to remain on, allowing for dual conversations. The phone call mode mutes all the other devices attached. This was something I needed to get used to. I average 50,000 miles a year, traveling to speaking engagements across the country and typically ride 10-15 hour days. I do occasionally need to take and make calls while rolling. On my June trip to Alaska and the California coast from my home in New Hampshire, I did get to experience a roadside chat with an officer as well as drive quite a bit out of the way because I missed radar warning and a GPS prompt. Maybe there is a way to hear the other devices while in a call, but I could not find that setting. Maybe I should save my calls for rest areas! 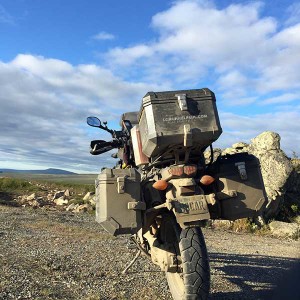 The first thing I noticed setting this system apart from the others is the ability to set individual volumes for each attached device from the LCD control panel. You also have the option of turning off the sound from a device without needing to reach for it and without affecting the other devices. Being able to make changes from the handlebar makes it real easy. The screen can be dimmed at night and is bright enough to see during the day without any issues.

The biggest difference between the Motochello and the other aftermarket systems is the quality of the stereo, true stereo sound. The rider even has the ability to adjust bass and treble. The helmet speakers are a tad thicker than other systems but fit fine into my full face helmet. The output of sound they deliver is pretty amazing even at the speed of light! Traditionally, I did not listen to much music while riding, in fact, over the past ten years, I have not changed my iTunes playlist, not even once! Apple hates me. 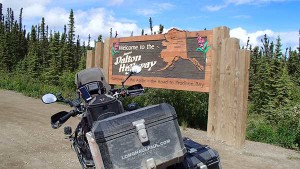 I found because the music quality was so much better with the Motochello than I was used to at highway speeds, I did indeed increase the amount of time I listened to music. In fact, on a recent trip, and for the first time in a decade, I made it through my entire music library! I have used the system now for about 30,000 miles, have used it through rain, hail, freezing temperatures all the way to 116 degrees Fahrenheit. I have travelled on roads of asphalt, gravel and dirt and I have to admit, the Motochello MC-200 is clearly a sound bet for hi-fidelity motorcycle audio.

“I once was told a cure for MS was a million miles away,
so I figured I would just go get it and bring it back.”

A man with MS …. A motorcycle… A million miles…